Ephram and Amy are reunited after a long summer spent apart while Ephram attended Julliard’s summer program in New York, but Amy’s euphoria is quickly replaced with paranoia after she notices Ephram acting distant. Meanwhile, Andy is plagued by guilt over whether he made the right decision concerning Madison’s pregnancy, and Dr. Abbott befriends the town’s newest citizen, Jake Hartman, who turns out to be a doctor from California looking to open a new practice in Everwood. 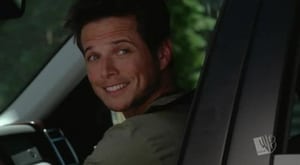